19 replies to this topic

So, just a quick background for anybody not keeping score:
- The EU and Ukraine entered talks to bring Ukraine closer to Europe.
- Former Ukrainian president Viktor Yanukovych basically stated that they were having a hard time since the EU wanted two prisoners released in Ukraine (concerned that their imprisonment reflected deterioration of democracy and rule of law in Ukraine)
- In November, Ukraine decided to halt proceedings with the EU and move closer to Russia instead
- Late November, upset Ukrainians gathered in European Square in Kiev to protest the decision. Police moved in at the end of the month with tear gas and batons to move them out.
- Basically after that, things became a riot. Police and protesters died.
- After lots of protests, Yanukovych got Riot Police on the job, having snipers suppress the mobs.
- The Ukrainian parliament then ejected Yanukovych from his seat and he was forced to flee the country on February 23rd
- The incoming president, Oleksandr Turchynov, has stated the country will move towards the EU
- Unfortunately, the southern half of Ukraine (Crimea region) is very Russia leaning and has started revolting about THAT decision
- Militia took over the Crimea region. Their APCs sported Russian licence plates
- Russia began holding war games near the Ukrainian border. After all this, the Russian Senate approved the decision to move troops (currently ~16,000) into Ukraine. It should be noted that these soldiers are welcomed in Crimea, where the prevailing opinion has been to get closer ties to Russia.

So, yeah, that escalated quickly. 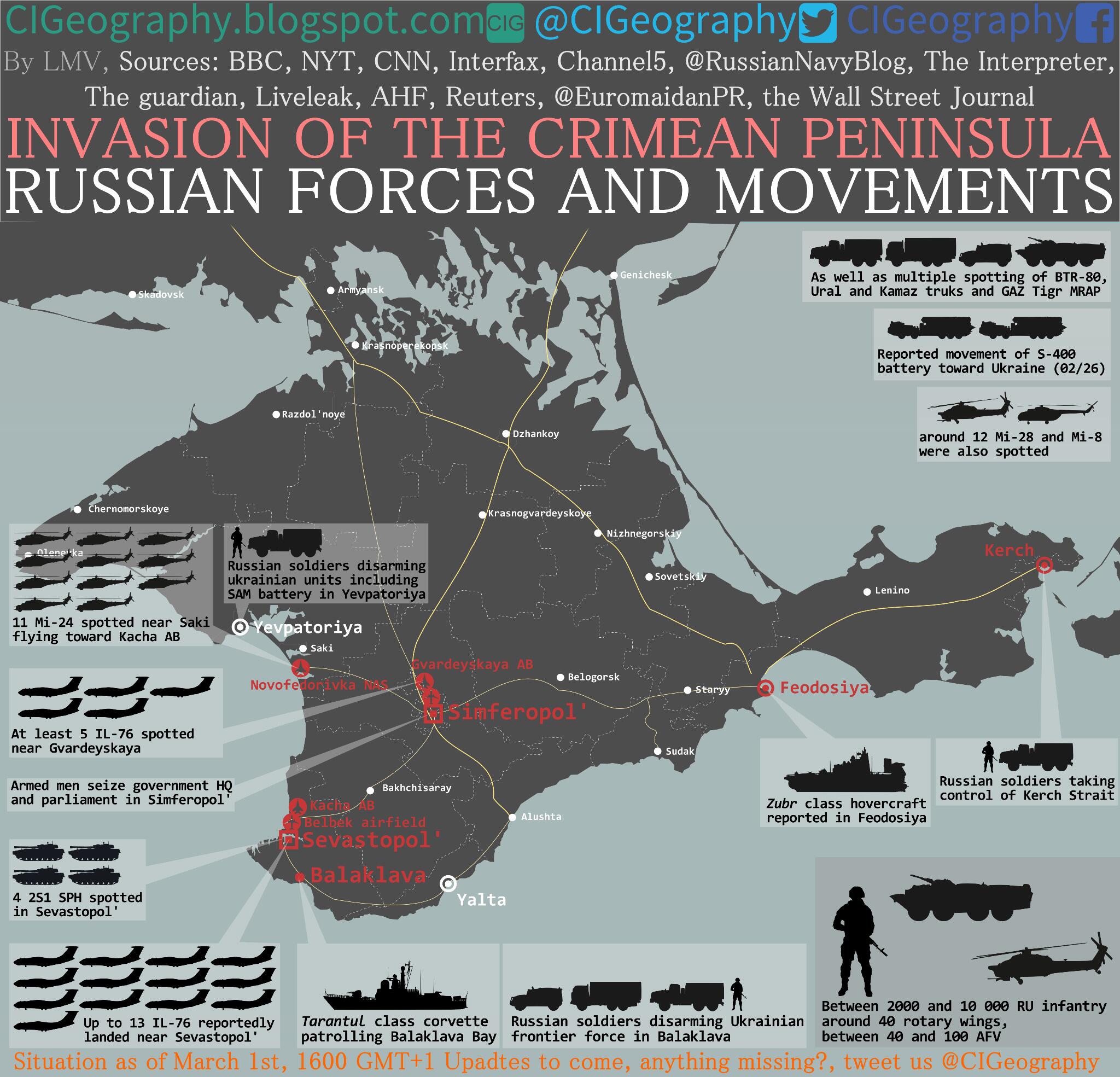 Incoming Tellius jokes aside, shit's getting real. I doubt that a peaceful division of Ukraine is happening at this point, which is troublesome.

Saw a report yesterday that the Ukrainian people wanted to really fight to keep Crimea. Let's be honest though, I don't see Ukraine being able to stand up to Russia. Then again I understand Ukraine's sentiments as well. They're an independent country trying to protect their independence and integrity, so I definitely understand that they don't want to give up without a fight.

Like mentioned though, shit's getting pretty real. Will definitely be following the developments with interest, but hopefully things won't get much worse than this.

Ukraine, without support, will be crushed. I've put an image below comparing the two military forces. Keep in mind though that a lot of Ukrainians may defect as quite a few consider themselves Russian. Meanwhile, nobody is looking good so far. Putin is clearly delusional if he thinks people will buy his "those are only defence forces" excuse. Meanwhile, Obama keeps making noise about crossing red lines...when clearly he did so well with Syria on it. The EU needs to seriously have a stronger response too...

I can't wait until Chapter 18 of this: Crimea Marches.

In all seriousness, this is just...bad. While I don't think the U.S should be stirring as much as they have done already, a response is necessary. Apparently the U.S has vowed to give Ukraine serious cash.

However, not much of a response from the EU IIRC. Hopefully something is in the works to create a solution that doesn't cause WWIII.


They are currently guaranteed 1 billion of the 35 billion Ukraine claims it needs.

The thing that gets me though is how often Obama claims "red line". That is hard to take seriously.


The only solution I think Russia cares about is "Sevastopol is Russia's and easy to control". That likely means holding the Crimea region unless a pro-Russian government is elected in Ukraine.

A UN envoy got surrounded by a mob today. It sounds like the head is ending his mission.

Looks like Crimean MPs voted to become part of Russia. Obviously that's not an ideal position for Crimea to remain in, but it certainly beats war.


To be fair, this is also likely an unfair vote. As the heads in Kiev mention, it would be an illegitimate vote.

Though it does ask that cultural question though - the divides have been very strong and it is the Crimea region that went nuts when Yanukovych got kicked out. This area does often identify itself as Russian first.

On the side, the EU is imposing sanctions on Russia.

Major update: Crimea is holding a referendum to see if they want to join Russia. The options are, basically, "Yes" or "Yes...later" as listed by the ballots. Also, 2.5 million ballots are being made for 1.2 million registered voters.

I think it'll play out like Georgia at this point. The world isn't pining to to do much more than impose sanctions. A war is just nuts and Putin doesn't want to back down.

I suspect Putin wants the "juicy" parts of the Soviet Union back...like a ground route to Sevastopol. Remember, this is the man who claims a major geopolitical disaster of the 20th century was the dissolution of the Soviet Union.

It's majority Russian ethnicity in Crimea, and it's been contentious for years. A referendum may have eventually been called, regardless of Russia.

But this is hardly looking like an honest referendum. As always, it would have been better (but not possible given the emotions in play) if the people of the country had been able to sit together and talk out whether to split into Ukraine+Crimea (which could then decide to join Russia if it wanted) or to federalize and just try and get a less awful government in charge. From what I've gathered Yanukovich was not popular with much of anyone besides his cronies.

And when was the last (or first) time a vote Putin had part in was honest?


I'm not sure Russia particularly cares about which people recognize it as theirs as long as it is technically their land. The area treats itself as Russian already since it's a primarily Russian speaking region (and greeted the soldiers as heroes) and when was the last time you remember Putin bending to international will? And try as it might from Kiev, I suspect Ukraine won't do anything unless the EU or USA backs them with military threats. We already know Putin doesn't really care or think the US threats are credible...so that basically leaves it to the EU. If memory serves, the EU didn't step in during the Georgia crisis, so Crimea is likely Russian territory after all this and Ukraine will dispute the territory's ownership for a while. The rest of the world might argue who it belongs to, but it probably won't change hands unless a larger force intervenes.

I'm just saying what the law is in Ukraine for it. Russia could give less of a shit.

EU struggles for quick response because it's the EU, the structure prevents it from 'quick'.


It also seems hesitant to any hard line responses either.

Also, isn't pretty much everyone waiting on Germany to do something?

Because it can't. EU only really has soft power/responses.

Really? I'm sure that, if everybody was shocked enough at something, they could unilaterally all decide to act on military force and declare, at once, that all constituent countries would put themselves at a state of war with a nation (as an extreme example).

The Crimean referendum, to nobody's surprise, is an overwhelming yes on reuniting with the Russian Federation.

Now we play the waiting game. Everybody loses as two sides claim they have equally valid (well, invalid IMO) referendums over ownership of Crimea.

The Crimean referendum was bullshit, and everyone knew that from the beginning. I'm surprised that they didn't put a lower number out there to even try and mask that this was Russia annexing part of Ukraine. Crimea, although largely Russian, is home to Tatars and Ukrainians, as well as ethnic Russians who are not particularly interested in being part of political Russia.


So was the Ukrainian one to leave the Soviet Union...hence all the cultural posturing. They were both illegal referendums held improperly and illegally. The biggest difference, really, was that the Western World opened their arms to anything leaving the USSR whereas nobody wants Russia to grab Crimea.


It is, but it's one of the most poorly integrated areas I know of. It's an area whose overwhelming majority still declares themselves Russian and speak Russian. Remember, this area only separated from the USSR with 54% support so there's no doubt some bad blood on both sides.


2 user(s) are reading this topic